If you have any further questions about this project, feel free to contact me: ptflea [at] hackerspace-bamberg [dot] de 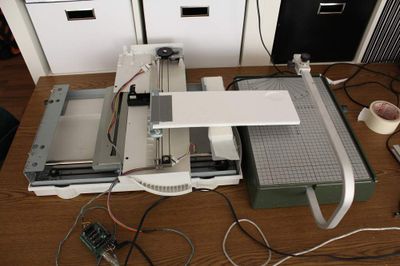 The lightscanner has some advantages: It consists of 2 stepper motors and rails which are synchronized. That means that the steps per axis are equal, so we don't have to compensate in order to plot some correct circles.

The internal electronics of the scanner were removed and the light unit was sawed to an appropiate size and was fixed across the slide of the scanner with two screws. Using Plaast, an angle bracket was attached to the slide to keep the styrofoam in place.

After reverse engineering the steppers by "trial and error" and measuring the resistors, they could be easily attached to the motorshield.

The arduino receives bit-encoded data from processing via the serial interface. Bit 1/2 controls the x-Axis and bit 3/4 the y-Axis So if you want to move the plotting position to x+1 and y-1, processing sends a decimal 9 to the arduino

Here is the arduino code:

The processing of the svg files is done by Geomerative-Libary. The library writes the data of the line into an array which is processed point by point in the following step.

As the arduino only understands relative movements which are expressed as points in each direction the lines are interpolated with the Bresenham-Algorithm.

You can download the sourcecode from github here: https://github.com/ptflea/Styroplotter -> StyroPlotter_proc.pde 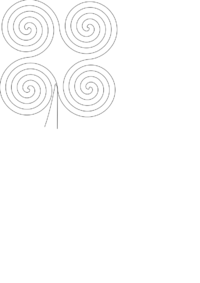 The processing reads the SVG files which were created with Inkspcape. The Styroplotter needs svg paths which run into one direction. To show the directions of the paths in inkscape you have to set the following preferences:

Check "Show path direction on outline" option. Now the paths should have small red arrows on them.

It's important that you pay attention to the direction of the paths -- otherwise, the path will look fine, but the styroplotter will interrupt and look for a place from which the direction is right. (The way it runs can be simulated in the processing code by commenting out the parts that send commands to the Arduino chip.)

You can find a cluttered directory of svg files on github in the data/ directory: https://github.com/ptflea/Styroplotter